One hundred years ago the war to end all wars began, it was called The Great War. It lasted over four years and millions were slaughtered to no avail, it all started again nineteen years later and was renamed World War One (WW1)

That war, The Great War 1914 -18, changed most everyone's lives including mine. I feel compelled to express my views of the conflict in paint and I do so very respectfully. This contemporary art - World War One paintings, are the results so far.

How was I affected by the Great War and why am I compelled to paint my reaction?

I was born at the close of the second world war, my parents had played their part as part of the Royal Air Force and my father was still serving. We were the victors and I did not as a child question that war was glorious. I was easily convinced that it was and grew up celebrating to the wonderful sounds of war - in my case Spitfires, Lancasters and other aircraft. My country had been victorious in two world wars how could I as a boy not believe that war was wonderful.

That changed in 1986 when I visited Flanders the site of so many great battles of The Great War including The Somme. I went for no particular reason other than to satisfy my curiosity, I returned with a strong sense of sadness but I did not realise it had changed my whole outlook on war as well, that came later. We spent around four days looking at the monuments, cemeteries and old trenches. My strongest memory from many is the rows upon rows of gravestones all with the same engraving apart from the name and sometimes the age. Those young men were all killed on 1st July 1916 the fist day of the battle of the Somme. Just a few yards away was another cemetery with similar engravings except it was 2nd July. Thousands of men were slaughtered each day until it paused in November of that year; the result was a win of a few yards of bloody mud.

As I grew older I understood that I had changed my outlook on war, any war. In particular I detest the futile losses of that so called Great War and I want to say so in the best way I know how to - in my paintings. And that is what I am doing now

The paintings below are about The Great War (World War One). They are in chronological order, the series is not finished I do not know how many will emerge.

Colour has been a big part of my painting but here you will see the colour drain out of some; then sometimes I will repeat the painting adding it back; this is my way of exploring  the use of colour (or not).

Events leading up to the war were predictable logical and stoppable. Fear and jealousy prevailed and the curtain was drawn back on destruction to come.

Flanders was one of the large killing fields. It is now a serene beautiful place, in the Great War it was a place of death and corruption. This painting depicts a young man's expectation of his service in Flanders as a soldier of The Great War.

The Menin Road was much fought over essentially because it was a few feet higher than the surrounding fields and gave the troops some advantage - they had the high ground for a while. Ownership changed hands frequently during the battles. I have done the same design of painting three times below to experiment with colour or the absence of colour in the artwork.

This painting is for all those children who thought their fathers were now monuments. See the small child in the bottom left

Beautiful red poppies appear in thousands each spring in Flanders and disappear soon afterwards, just like the soldiers. No wonder it has become the British symbol of remembrance.  This painting connects a soldier's helmet to the poppy.

The horrors of battle haunted the soldiers awake and asleep. Several hundred refused to fight again. They were shot by their own.

We have now recognised the affects of war on a combatant's mind and given it a name "Post Combat Fatigue" In 1914 it was called "Lack of Morale Fibre" or more directly "Cowardice" . Now we treat it in hospitals,
then the soldier was shot by his pals. Some progress for mankind.

Trenches were where soldiers lived fought and died

The Battle of the Somme began on 1st July 1916. It petered out in November of that year. Over one million men were killed or wounded. No ground was won or lost, no advantage gained by either side.

German troops christened the British troops Tommies. It was a respectful even a fond title for their enemy. They killed many thousands (as the British did to Fritz) and they are still in neat rows in Flanders fields. The name remains and is accepted proudly by the British Army. 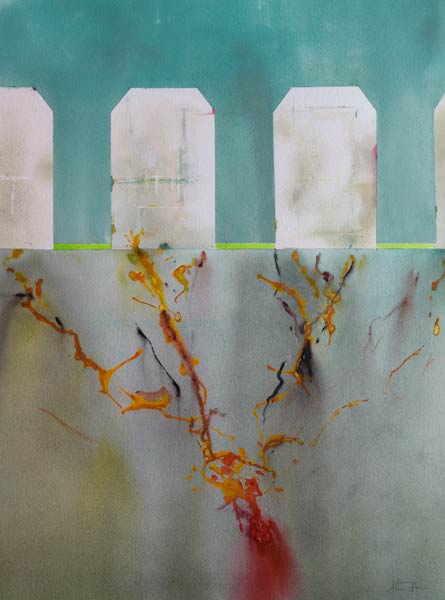 Just one tree remained standing after the battles in Flanders during The Great War. It survived somehow. The men looked upon it with awe and a certain dread, it seemed to mock them

Stark and chilling were the trenches and expectations of the soldiers. Perhaps they could find shelter and maybe warmth but the expectation of death was a constant companion

The Great War ended at 1100 hrs on 11th. November 1918. Surviving soldiers came home ill equipped to handle "normal" life. Twenty years later those same soldiers were told to do it all again - Germans and the Allies.

would you like to see another painting series that were inspired by a strong feeling. The artist has strong views about the pollution of the planet - click to view